On Tuesday Vancouver International Airport announced that Japan Airlines would be the first carrier to bring the Boeing 787 with regularly scheduled service beginning February 3rd 2014.

“Metro Vancouver’s community of aviation enthusiasts – me included – is thrilled to welcome the Dreamliner to YVR,” said Craig Richmond, President & CEO, Vancouver Airport Authority. “Japan Airlines has connected travelers between Vancouver and Tokyo since 1968. After 45 years of great history and close to 23,000 flights, we are so pleased to celebrate JAL’s next chapter with the latest in aircraft technology.”

JAL will introduce the 787-8 Dreamliner to the YVR-NRT route using a phased approach, beginning with one weekly flight on Mondays and extending to its daily flights by March 2014.

This however will not be the first time for the Dreamliner to come to YVR as ANA has had its Seattle flight divert several times for a gas stop when it was too foggy for them to get into SeaTac.

It was originally believed and reported that China Southern was going to be the first airline to operate the 787 into YVR, however they aren't planning on having it operate on the route until February 10th 2014 just a week after Japan Airlines will start service. But unlike Japan Airlines, China Southern will operate the route daily with the 787 rather than one time a week service.
Posted by Unknown at 3:01 AM No comments:

Cathay Pacific has spent this holiday season ramping up its fleet and preparing for the future. The first was announced on December 20th when the carrier announced its order for 21 777-9X's becoming the Asian launch carrier for the type.

"The 777-9X promises us improved payload range capability and reduced operating costs, in addition to a significant reduction in environmental emissions," said John Slosar, chief executive of Cathay Pacific Airways. "We think it will be an ideal fot for long-haul destinations in North America and Europe, in particular those routes where we carry high volumes of passengers and cargo each day. Cathay Pacific is committed to modernizing its fleet to provide a superior experience to passengers."

The order, at list price, is valued at $7 Billion US, HK$58 Billion. Cathay Pacific expects to take delivery of the aircraft between 2021 and 2024.

"Cathay Pacific and Bowing share a long-term partnership that spans four decades," said Boeing Commercial Airplanes President and CEO Ray Conner. "We are honored to continue our tradition of launching new airplane models with Cathay Pacific in Asia, starting with the Rolls Royce powered 747-400 and the original 777-200, 777-300, 777-300ER and naturally, now with the 777X family."

Slosar added that, "the 777-300ER has done a superb job for us and Cathay Pacific is now the second largest operator of the type. We are now delighted to be an early customer for this next generation of the 777 aircraft."

Just a week later on December 27th the carrier announced an additional order for one more 747-8F and three more 777-300ER.

Posted by Unknown at 2:31 AM No comments:

On Monday Southwest Airlines released its schedule through June 2014 and with it came several additions.

The first was a increase in San Diego service, adding nonstop flights to Portland Oregon, Seattle, New Orleans and Orlando.

This comes as an interesting move as Delta has also recently announced plans to begin nonstop service to San Diego from Seattle with four flights a day using its regional carrier Skywest Airlines with there CRJ-900's. The Delta flights will begin just 6 days before the Southwest one does.

Southwest also announced plans to continue its service to Cabo using its own metal over AirTran from Austin Texas. The flights will be operated three times a week. Austin will also get a new daily nonstop flight to Portland.

Other new nonstop flights that were announced for Portland were Houston Hobby, Chicago Midway and Baltimore/Washington. The above mentioned San Diego flights will be twice a day.

As Southwest moves to the final phases of its integration with AirTran it announced all new flights from Atlanta that includes service to Detroit, Minneapolis/St. Paul, Milwaukee and Pittsburgh.

Posted by Unknown at 2:11 AM No comments:

The new services will all commence on May 29th 2014, just ahead of the carriers launch of new flights to Seoul, South Korea and Hong Kong. On top of all of the carriers other international destinations from SeaTac.

The Juneau flight will also be seasonal along with the third flight to Anchorage, and both flights will be -operated using the carriers Boeing 737-800's seen above. For it's service to San Jose the carrier will use its regional partner SkyWest Airlines using the carriers 76 seat two class Bombardier CRJ-900s seen below.

Posted by Unknown at 9:10 PM No comments:

On Monday American Airlines announced that it would give its employees the opportunity to vote on whether or not the tail logo should be changed from the new flag design to the classic AA logo.

The airline released an artist rendition and even launched a twitter campaign to see what people thought. For those that like the current tail they have promoted the hashtag #KeepTail and for others that want it to change you can tweet using the hashtag #SwitchTail.

Having seen the renditions in the image above, the old AA tail with the new scheme makes the plane look very plain, no pun intended. If it is voted to change the scheme back I for one hope that they add something to spice it up. Otherwise they will have gone from being one of my now favorite and best schemes in the industry to one of the worse.

Many who are opposed to the current scheme love the classic AA scheme that I for one will say looked great when it was freshly polished, but truthfully was extremely aged and needed for change. I think the issue with the new scheme is to truly appreciate it you need to get up close to the aircraft to really see the detail in it, especially on the tail which is something that I believe many who oppose it have yet to do.

One other major issue is if American brings back the AA on the tail it will create some brand confusion as your aircraft will now be promoting two major logos on it. The logo is no longer the red and blue AA that you see on the tail on the chrome aircraft, but rather the eagle seen in front of the American on the new scheme. This would be awkward to have both logos featured on aircraft.

One thing many people also associate the old logo with the old American that honestly was not loved, the point of rebranding the way that the airline did was to show that it is making changes and working on customer and employee relations.

Ever since the re-branding was announced I have seen an improvement on both fronts. Also with a new brand they launched a new product. When I flew on the carriers new 777-323ER I for one was blown away by it. They are really stepping up their game and by going back to the old logo you risk bringing back the poor association that goes with that.

On the new A320 family of aircraft that the carrier purchase it will feature lie flat beds for the transcons between LAX and JFK. Something that until recently was unheard of for a domestic product with in the US. But when you really think about, transcon flights are the same length as JFK-LHR, about six hours and those flight feature that along with many varieties of wide-body aircraft.

Doug Parker who is taking over the merged US Airways and American Airlines has been publicly known to be very anti the #NewAmerican scheme, but in a recent post he stated, "I have always believed they are not particularly important to the success of an airline." I do love though that he is letting the employees decide which it should be, that is something that you don't see often within airlines anymore, letting the employees decide the fate of something like your airlines main scheme.

While there is much heritage with the old, it is also a reminder of the troubled past that American Airlines has suffered through, from 9/11 to the A300 crash in New York just weeks later, then for the "final act," the bankruptcy, I for one thought it was good for the carrier to step away from what many have said was an old and tired scheme and try something new and innovative which is what the new brand and scheme did. It was a refresh of a new time and bright future for American.

Also no renditions has been released yet but we also learned that American will be painting an aircraft in a TWA heritage scheme, a very classy move that I think will look amazing, but with the way US Airways has had all of its heritage schemes with PSA, American West and other airlines that is merged with, part of me was surprised and never saw it coming, but is also not surprised since US Airways likes to pay tribute to the carriers it has consumed and merged with throughout the years and even though it was American that consumed TWA, it has still helped build the American Airlines that you see today.
Posted by Unknown at 4:51 AM No comments: 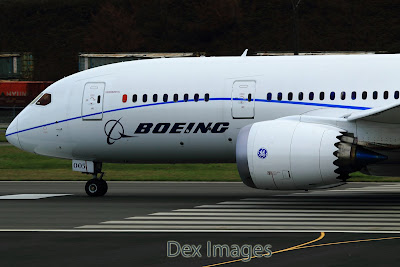 Photo Taken at BFI as the first of two GEnx Powered 787's departs on a test flight.

Flight Global reported today that General Electric (GE) is quickly approaching the required number of cycles for it GEnx-1B for Extended Operations commonly referred to as ETOPs. The GEnx-1B is used to power the Boeing 787. Having just surpassed 2000 of the required 3000 test cycles GE says that they are still on schedule for certification to be achieved in April, despite the month that they lost during testing when cracks were discovered on one of the engines main turbine blades just after 1500 cycles.

The cracks were found in January during a normal inspection of the engines after it reached the halfway point of the testing phases. GE pulled the blade off the engine to service it and fix the cracks and was placed back on the engine in late February when testing was then resumed.

Since this was discovered during a normal inspection similar to that of normal operating procedures it was deemed that it did not affect the normal operation of the GEnx-1B and was not any type of abnormal wear and tear.

GE believes that final testing and certification for the engine with the FAA will be completed by October in time for Boeing to deliver the first GEnx-1B powered aircraft to Japan Airlines.
Posted by seahawks7757 at 9:01 PM 1 comment: 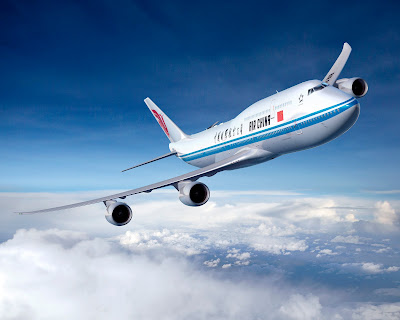 Photo Courtesy of Boeing. An artist rendition of what the plan will look like.

Today Boeing and Hong Kong based Air China announced an agreement for 5 747-8I aircraft. Air China will become the first Chinese airline to order the all new more fuel efficient plane.

The aircraft will likely be put on routes such as LAX and JFK that are already served by 747-400's. Air China's president is excited about the announcement and believes that is will bring a better experience for it's customers.

This is the third airline customer for the passenger version of the aircraft. The other two are launch customer Germany's Lufthansa and South Korea's Korean Air.
Posted by seahawks7757 at 6:11 PM 1 comment: